I have an affliction - I can’t seem to say ‘no’ to anything. END_OF_DOCUMENT_TOKEN_TO_BE_REPLACED 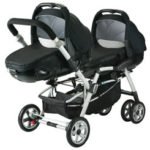 We’ve worked our way through a few twin prams since the boys were born, each time thinking we’d found the ultimate solution, only to be disappointed. I thought I’d do a post about how to pick the perfect twin buggy so that my wasted money might help someone avoid the pitfalls of buggy buying. END_OF_DOCUMENT_TOKEN_TO_BE_REPLACED

The arrival of Harper Seven Beckham this week started me thinking about baby names. END_OF_DOCUMENT_TOKEN_TO_BE_REPLACED

The boys clamour up the stairs trying to overtake each other on the bend. They reach the stairgate opening at the same time. For a few seconds they’re wedged together in the narrow gap - a mass of flailing arms and legs – then they topple forward and fall in a heap on the landing. After a moment to untangle their limbs they’re on their feet running to the bathroom. Splosh. Anything within reach is thrown in the bath to a chorus of giggles. Pyjamas (laid out all ready), a new nappy and every END_OF_DOCUMENT_TOKEN_TO_BE_REPLACED

My two boys were breastfed for the first three months of their lives, with a bottle top up as they were seriously hungry babies. I tried feeding them myself entirely but they would eat for an hour then be starving an hour later. Giving formula as well created more work (washing up, sterilising and preparing bottles) but at least it meant I stuck with breastfeeding for as long as I could. END_OF_DOCUMENT_TOKEN_TO_BE_REPLACED