Welcome to the relaunch of Tales of a Twin Mum: A family, travel and lifestyle blog!
Ten things you should say to someone expecting twins, and ten things people actually say
Tots100 in the UK and Digital Parents in Australia have come together to co-ordinate a blog swap to celebrate International Blog Swap Day. A huge number of bloggers are taking part, and it’s a great way to discover some new blogs from the other side of the world.

I’m hosting Caitlin from Caitlin’s Happy Heart who lives in Queensland (possibly the state we’ll be moving to in just a few months!) She’s been blessed with five gorgeous children, including triplets. And I thought my house was hectic! As both have multiples, we decided to go for a twin and triplet related theme. Please pop over and take a look at Caitlin’s blog where she’s hosting my post about what to expect from newborn twins. Take a look at her other posts too – this one made me cry as it brought back lots of memories of taking my boys out to the shops in their double buggy when they were that age. Plus she’s potty train the triplets as we speak, so go over and show her your support!

Hi! I’m Caitlin from Caitlin’s Happy Heart. I live in sunny (mostly) Queensland, Australia and as the name implies, I blog about things that make me happy. I’m married to The Accountant – Alex, (who makes me very happy, except when he examines bank statements and queries my shopping habits), and I have five children who make my heart soar. I have two older boys (6 and 4 years old) and we have two year old triplets! (Identical boys and a girl.) Of course my kids give me plenty of material to blog about, like Camping with five kids including one year old triplets, a Triplet Pregnancy Journal and celebrating birthday parties like my son’s fruity dragon 3rd birthday or my eldest son’s 6th birthday Spy Party I also like posting about my faith, literature, cooking and fashion.

Karen shared her ideas on What to Expect With Newborn Twins over on my blog, so I am going to return the favour and blog about life with Newborn Triplets.

When I found out I was having triplets, my mind was in a total panic wondering how on earth I would survive. After my ultrasound, my signature was very wobbly as I paid the bill because my hands were still shaking!

However, my triplets are now toddlers, so it would appear that survive I have. Although, I must admit there are days where I still wonder if they will ever make it in one piece to adulthood. Two year old triplets are a trio of never ending energy and a constant display of unbridled emotions. Which is fine when they are happy, not so much when they are howling at your feet because you didn’t let her lick the toilet seat. (True story from today. Unfortunately.)

It makes the newborn days seem like a distant memory, and goes to show that every stage of life have their own challenges. But the thing that you can expect (in my experience) with newborn multiples is lack of sleep. And this is what makes those newborn days so ultra challenging and very exhausting. I hope that I will never again be as tired for such a long period as I was during those first few months. Having babies feeding in three hour cycles, and normally taking two hours to feed 24/7 was exhausting to the max. During the first three months I was averaging four-five hours of broken sleep in a night. I remember emerging from the fog as they started to sleep longer. The first time I got to sleep three hours uninterrupted I thought I could conquer the world the next day! 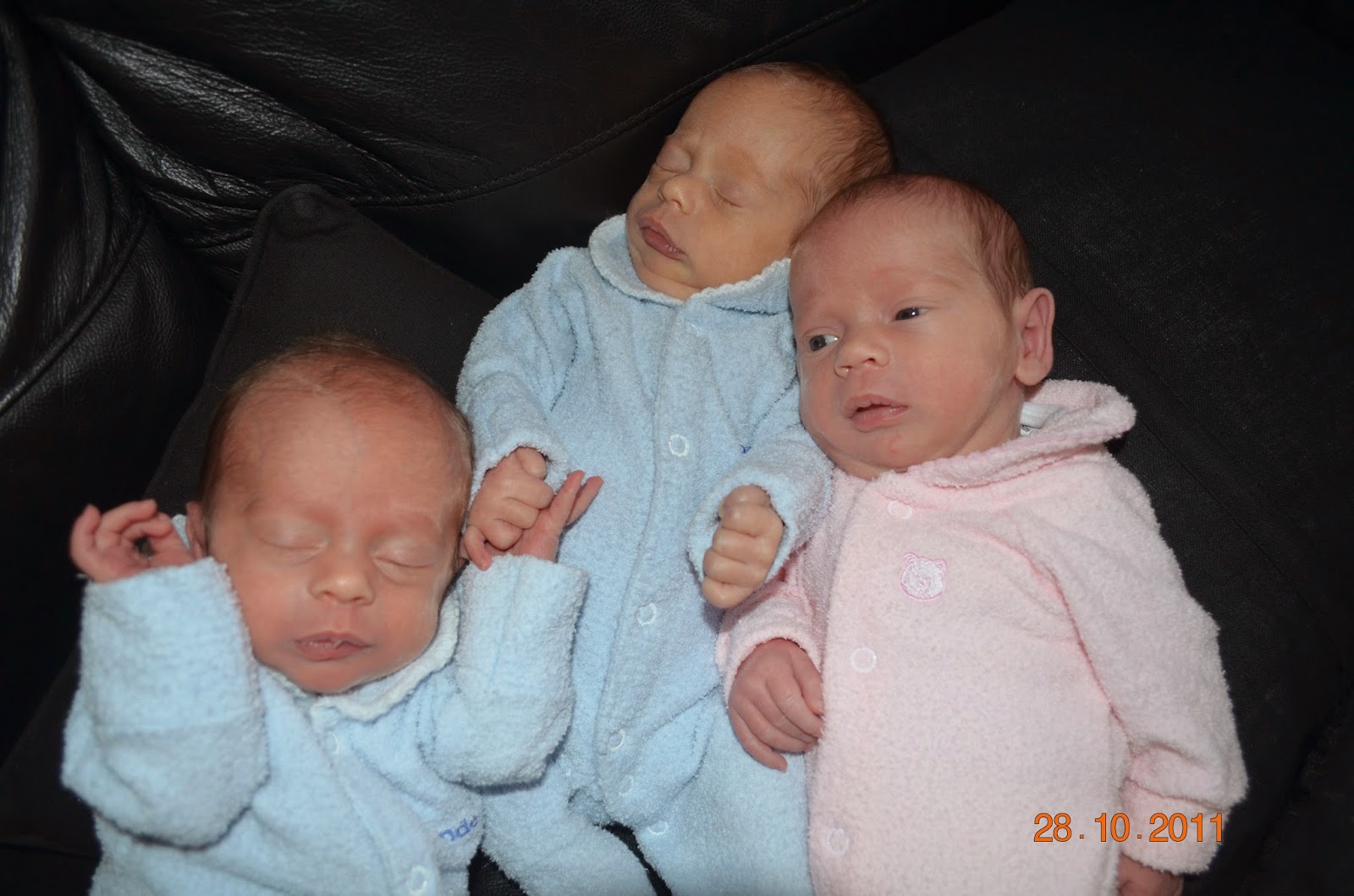 Admittedly my triplets had colic and reflux. So this also contributed to their night time battles, and also meant they were difficult to settle in the early evening. My advice if you have a baby(s) with colic who fusses in the early evening is to ignore the experts who say to put the baby awake in the bed to fall asleep on their own. Don’t worry, they’ll get that concept eventually when their tummies don’t hurt so much. We found holding them upright snuggled into our chests allowed them to sleep. I found myself appreciating the forced slow down time, and while I didn’t sleep much while I held them, I would just watch TV with one or two babies, sometimes three if Alex wasn’t around and just enjoy the feeling of those little sweet infants. I don’t miss the Mummy baby brain that accompanies a newborn child, but I do miss those newborn cuddles, and the feeling of having three babies nestled into a triplet cuddle is just the sweetest thing.

Because I had already had two children, I knew that I did well at breastfeeding. I was keen that the triplets also would be breastfed. Yes, breastfeeding higher order multiples is absolutely possible! (You can read how we started doing this here) I did have some plans on how to do it, but the reality soon caused these plans to adapt. My triplets didn’t like twin feeding. I think it’s because when you are a twin, there’s just no choice, that’s the way it happens every time you get fed. But when you are a triplet, every third time you get a feed on your own, and the next time you feed after that, you think, “Why is someone else here and why am I squashed under Mummy’s arm rather than nestled in her chest?” Well, I’m fairly certain that’s what my trio thought. It soon became apparent that feeding them each individually was going to work well for all of us. (I kind of hated the twin feeding pillow too, so I kind of agreed with them.) So one on one time with Mummy is what we did. The first two were fed one breast, the last triplet drank from both breasts. I was able to exclusively breastfeed them in this way for three months. After this I started to supplement after each feed with a little formula because they were still a little hungry.

Because so much time was taken up with feeding, I really relied on a lot of help. That would be one of my biggest hints if you are pregnant with multiples. Organise a support network. You will need it. Meals, housework, taking bigger kids on playdates, baking goods for snacks and lunch boxes. Every little bit makes a huge difference.

Before all this home life happens, most triplet Mums need to get through time in the NICU with premmies. We were fortunate that we only stayed in a special care nursery for a bit over two weeks and the babies were super stars and pretty well just needed to feed and grow.

Having multiples, or higher order multiples is very tiring. But it is also exhilarating. Life thunders along at a frenetic pace. You will never be bored again. Not ever. Your heart will be full. Forever.

It’s a wondrous thing being a mother of multiples. Welcome to the relaunch of Tales of a Twin Mum: A family, travel and lifestyle blog!
Ten things you should say to someone expecting twins, and ten things people actually say